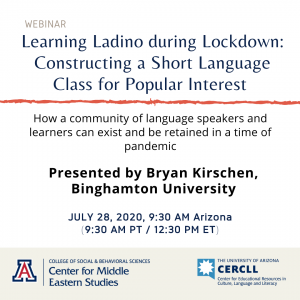 Judeo-Spanish, often referred to as Ladino, is a variety of Spanish that continues to be spoken by a limited number of Sephardic Jews today. While classified as an endangered language, Judeo-Spanish is experiencing a resurgence of sorts, one that is particularly advanced by learners of the language. This talk highlights a recent online mini-series of workshops offered in Judeo-Spanish, which generated interest and participation from hundreds of students from around the globe. Additionally, this talk considers the role of the current pandemic and how a community of speakers and learners of a language might exist and be retained even during a time when state and national mandates require its citizens to remain at home.

Bryan Kirschen is Assistant Professor of Spanish and Linguistics at Binghamton University. Dr. Kirschen is a sociolinguist specializing in the Spanish language, and has published on Judeo-Spanish (Ladino) and the use of Spanish in the United States.

This event is part of the Center for Middle Eastern Studies‘ Virtual Lessons Learned series, and cosponsored by CERCLL, the Critical Languages Program, and the Arizona Center for Judaic Studies.