Since these learners can differ from foreign language learners in their motivations, language proficiency, and levels of cultural understanding, a growing body of research is dedicated to becoming familiar with these learners and their needs. A recent presentation by Olga Kagan, during CERCLL’s Intercultural Competence Conference in January, 2012, highlighted the issues of intercultural competence for heritage language learners. To access the video of the presentation, click on the image below.

The paper by Olga Kagan on this topic will also be coming out soon along with the proceedings for ICC 2012.

There are also several efforts to adjust curriculum to this group of learners. This is more clear-cut in programs which have the resources to create separate programs for this, such as the Spanish for Heritage Learners Program at the University of Arizona. This program provides a place for heritage learners of Spanish to flourish in their linguistic and cultural knowledge, and become better aware and proud of their Hispanic heritage. One strong advantage to this separate program for heritage learners is that these students are tested in their language abilities and then given individualized instruction in any of six courses. This program is also very large, with about 600 students per semester. For more information, go to this program’s website at http://w3.coh.arizona.edu/spanish/heritage/under_heritage.cfm, or download a brochure about it at http://www.cal.org/heritage/research/voices.html.

This issue is especially relevant right now since this month, from September 15–October 15, is Hispanic Heritage Month. This month has been designated as a time to honor the heritage and culture of Hispanic and Latino Americans, and to recognize their contributions to the US. This month-long commemoration started as a week under President Johnson, until it was expanded into a month and put into law during the time of President Reagan. For more information, here is a site dedicated to Hispanic Heritage Month: http://hispanicheritagemonth.gov/ 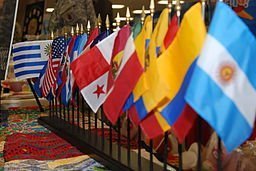