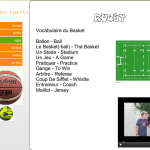 Inspired by the 2011 workshops, one teacher developed several creative projects over the past year. Her classes developed websites, recorded videos, played digital games and used social media in the service of learning a language while also exploring issues of culture and identity. Read about these projects and her experiences below, in her own words.

Because these projects feature her students in video and images, the teacher has chosen not to share her name or the location of her school.

I was an attendee at two of this summer’s workshops (Digital Gaming and Multiliteracies) and I just want to thank you again for the scholarship to those workshops and for the great, classroom-changing sharing that you provided. It has been so exciting to bring workshop ideas into real-life teaching. I have incorporated a lot this first semester, but wanted to show you the latest, which my 8th grade class produced for the quarter, which covered fashion and clothing. I think from your end, you might be able to see the influences both workshops had on the final product.

Websites and videos in the target language

The entire class participated and the challenge was to incorporate fashion into an online project that showed advancement and learning in:

…[P]retty good for 13 year olds working collaboratively. And I have to say that I wouldn’t have even attempted this without the workshops.

…[W]e have done one website a quarter aligning with what we have been covering in class. The sites had to incorporate language (written and spoken), culture and technology skills they needed or felt they needed to learn… I required video on the last sites as to discourage dumping things into Google Translate. Students seemed to get really nervous, though, and most opted for memorized scripts which came out very stilted sounding. I am thinking of morphing this project into one where students must make weekly postings- perhaps with my prompts. Students have so many creative ideas—but at this age it’s hard to get them to agree on ones that are doable as a collaborative project.

I have started a Facebook project with other middle schoolers. They have to take on a historical persona and create a fake Facebook page in that identity. They research this person and create a historically accurate posting on their page each day. They also comment on other classmates’ postings weekly. Students must respond only in character, and may not friend anyone other than me, parents, or classmates… [Most parents were] excited and encouraging of the project. They expressed interest in watching what happened, and I think liked the idea that they were being included in watching what their child was doing on Facebook! Students are allowed to “like” other pages, in line with character, and are allowed to play Facebook games that are appropriate to their character and to their age. Students have characters that align with each other and have had fun filling out their “bio” with historically accurate and also creative information.

I worked with high school kids using games in the fall. Students created vocabulary worksheets relating to the game and also what we were working on in class.  Sims Social on Facebook was a great game, as were some of the other Zynga games (the boys loved Empire and Allies)… Some students found ways to spend most of their time in English and translate it over into French, but most did play in French. Sims had some inappropriate situations for most teenagers, and I had to have parental permission slips for that.

Eventually, many of the students became bored with their games (as I imagine many do with online games that involve a lot of repetitive actions and asking friends to respond)… I have been searching for other games that might incorporate what we are working on in class with culturally accurate information for French… It was difficult to come up with worksheets or questions for students to ponder while playing games as there was so much variation in what each person was doing.

I hope to tweak and expand these projects, which were prompted by the workshop and the ideas they stimulated… [T]hese projects aren’t what the workshops were about, per se—but what I learned kind of blended together for me in terms of working on multiliteracies and also incorporating the stimulation of internet interactions (including games) that we all have witnessed captures students’ imaginations quite compellingly.